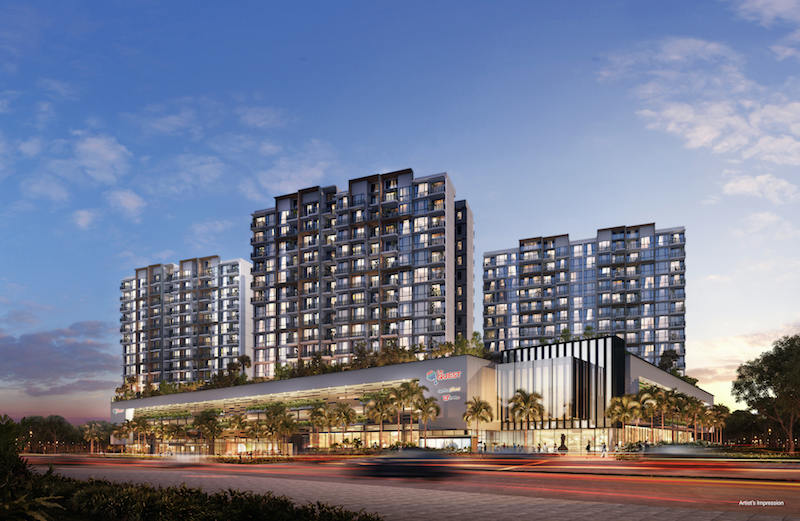 Le Quest ~ New Launch Condo Bukit Batok Singapore written by: Hope Favor Singapore is one of the nations that have experienced a massive development in the real estate industry. Various residential and commercial projects are established in Singapore, and Le Quest stands as one of the most anticipated.

Le Quest is a condo project located in Bukit Batok, Singapore. It is considered the first mixed development project that is to be launched in Bt Batok. Typically, it entails both residential and commercial units that will be available for vacant possession after the official launching.

The residential units are available in different styles and categories. The available condos range from one bedroom to four bedroom units. If you want the extra executive selections, you can go for the penthouse apartments that come with different layouts as well. All the condos have been designed with diversity to meet the needs and lifestyle of the potential tenants. In general, there will be around 516 residential units that are divided into five blocks. Each block comes with 16 floors, along with retail units. The residents also get to enjoy a supermarket and a child-care center.

Le Quest has been perfectly designed to be an ideal residential project for the future occupants. Each of the five blocks come with a retail mall on the first floor, a childcare center on the third floor, and the residential condos are from the fifth floor onwards. Parking lots are also in plenty.

There are various amenities and facilities in and around Le Quest. This assures the residents of a reliable neighborhood filled with every relevant amenity. Whether residents want to shop at the retail malls in the first floor, or they want to move to the bigger malls nearby, they can always be sure of reliability. The nearby shopping malls include the West Mall, Westgate, as well as JCube. There’s also the Lot One Mall, which is slightly far from Le Quest.

Even though this condo project seems to have a massive popularity in the recent times, it was established over ten years ago. For over a decade, people have been waiting for the official launch of Le Quest, and it is almost here. What makes this project extra special is the fact that it is first of its kind in the Bukit Batok neighborhood.

It is reported that the condos would cost about $500K per unit. The neighborhood is not packed, yet. So this gives the future Le Quest residents an appealing view of the greenfield sites around. The cost of the units might go up due to high demands in the future. All in all, it is a project that is elegantly developed to meet the needs and expectations of the residents. Whether you are single or you have a large family, this place would be a perfect destination for you. As mentioned, Le Quest is located in the matured residential neighborhood of Bukit Batok. The developers chose a perfect location for the project, which is surrounded by plenty of amenities. Even though the project is still undergoing construction, it is expected that high-rise developments will neighbor it in the near future.

The Bt Batok neighborhood is well-known for its greenery, including trees and cool parks. These are other things that make Le Quest a target for many tenants. The Bukit Batok Hillside Park is one major park that surrounds the project.

Education centers, eateries, and child care centers are other facilities that neighbor the project. Regarding the education centers, there are several schools, including Bukit Batok Secondary School, Millennia Institute, Eden School, as well as Dulwich College. All these centers are located within two kilometers from Le Quest.

A hospital, St Luke’s Hospital, is located along the Bt Batok West Avenue 3. It would take you just 10 minutes to drive to the hospital from Le Quest. Other than the shopping centers, there is also a railway station in the neighborhood.

It is easy to commute to work from Le Quest, especially if you own a car. The Bukit Batok Road passes through the project and connects to the PIE – Pan-Island Expressway. This means that you can get to the highway in less than five minutes. The only thing that might slow you down or take much of your time is the possible traffic jam. If you work in the IBP – International Business Park, you can drive to Jurong East via the PIE. The IBP is easily accessible from IMM and Jurong East.

Typically, Le Quest is in an ideal location, which allows the residents to access various facilities, amenities, public centers, or other service providers. Whether you use public transport or you own a car, accessing these places is not a problem. The Qingjian Group is the company that developed Le Quest. This is a multi-national company that has been in the real estate market for over 60 years. The company is known for offering various services including logistics, real estate development, contracting and investing in various nations, as well as capital management.

It is a Chinese construction company that has a good reputation in the real estate industry. Qingjian Group stands among the few property-based companies that have the ISO9001 compliance. In 2014, the company took the 98th spot out of 250 companies that were listed in the Top 250 International Contractors by the Engineering News-Record.

The construction group has been developing a variety of buildings in Singapore, and it is not a surprise that they are the ones working on the magnificent Le Quest project. Over the years, the Qingjian Group has worked on public and private residential projects, industrial, as well as commercial projects.

Some of the private, executive developments that were developed by Qingjian Group include Riversound Residence, Nin Residence, Ecopolitan, iNz Residence, Bellewoods, The Visionaire, River Isles, and RiverParc Residence.

The developers are known for their dedication to developing top-notch homes all around Singapore. Other than being ranked 98 out of 250 companies worldwide, the company has also bagged several awards. In 2016, the group was declared the Best Residential Interior Design and the Best Executive Condo Development due to some of the projects they delivered. For that, you can be confident of occupying a classy condo in Le Quest, which is developed and designed by the Qingjian Group.

Should You Consider Purchasing A Unit At Le Quest?

If you want a residential project in an ideal location and surrounded by all the relevant amenities, Le Quest is the place to be. It is a mixed development that assures you of all the needed products and services within the neighborhood. The price is also reasonable enough, especially because it has an executive design and layout.